When did Solar become a verb?

Having my longtime (longest) friend Mackenzie and her husband Matt visiting this past weekend from San Diego, meant ventures into the world I rarely see, ie: anywhere that isn't Mars Hill Graduate School, Intiman Theatre or my bedroom. One of these trips was a visit to Fred Meyer- a chain of stores that rides somewhere between K-Mart, Target, Ross and Pier 1 Imports. Matt had visited one in his youth and wanted to see if he'd still be impressed. Many things made an impression on us at Fred Meyer, not the least of which being a miniature water fountain made to look like glowing, melting candles. Is it just me, or should water not be flowing from one burning candle to another?? 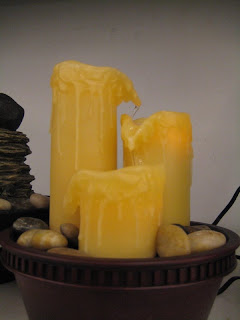 But most earth-shattering was the discovery of the word "solar" being used as a verb. Check it out. It's pretty amazing. 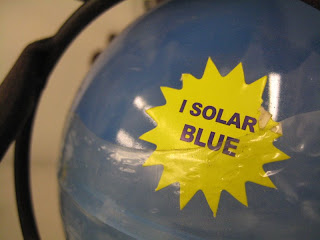 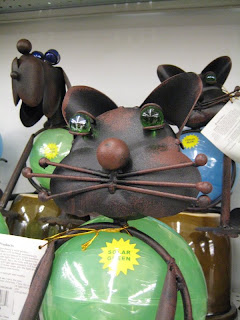 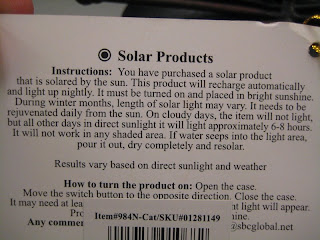 "You have purchased a solar product that is solared by the sun." Thank goodness its not one of those crappy Lunar solaring products! This is the real deal. 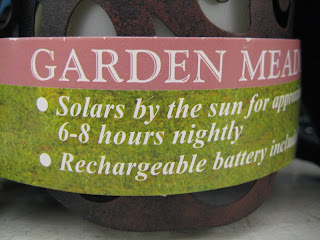 Thanks for the pictures Matt and Mackenzie. I haven't solared at all since you left.
Posted by Kj at 1:44 PM 2 comments:

Haiku for a Friend

Hope is believing
your desire isn't dumb
even when it hurts
Posted by Kj at 3:27 PM No comments:

"Fill Your Hearts With Christmas"

Yes, it's true. For me, Thanksgiving is the half-way mark of the Chrsitmas season, not it's prelude. But out here on the West Coast, there's a particular harbinger of the season that I quite actively miss, strange as it is. Kim, my Brooklyn kindred knew this fact, and pre-emptively sent a loving email with this image included. 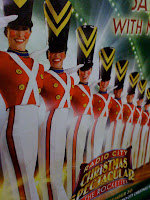 I've never even seen the Radio City Christmas Show, but the TV adds for the production are so annoying that I began to love them and get excited every time they came on. I particularly like/hate the poor rhythm scansion when they sing "The Rock ETTES are all a-Dancing!". They place the syllabic emphasis on the second half of Rockettes as if its iambic, but the word should be spondaic, "stress- stress." And I sing along to it every year. But not anymore. And I can't seem to find the classic commercial on Youtube (anyone else?).

But nonetheless, for me, Christmas is officially here. More on that later.
Posted by Kj at 6:53 PM 3 comments:

It's official. In February I'll be headed to Albuquerque, NM with Ian to present our paper at the Southwest/Texas Popular and American Culture Association's annual conference. Their theme this year is "Reeling in the Years: 30 Years of Film, TV and Popular Culture".

Ian and I are presenting a paper that explores issues of faith as escapism and fundamentalist identity in Joss Whedon's Firefly. It still hasn't really hit me that I'm gonna be presenting a paper at an academic conference, much less that I'll have four days of attending lectures on these topics:

I also can't quite believe that my first foray into the academic sphere will be in the Sci-Fi/Fantasy category. But hey, we all know that's where all the real theological discourse in popular culture happens.

We'll be fine tuning, and well, writing the paper for the next two months, and I'll be finishing my crash course in Angel and Buffy, Whedon's epic TV contributions. I love this kind of homework.
Posted by Kj at 11:46 AM 4 comments:

Walking Back into Barnes & Noble

I have for years idetified myself as someone who avoids buying books at Barnes & Noble. I've probably forgotten most of the reasons why I don't "support" them, but its probably that general stuff about how they're ruining the publishing industry and killing local booksellers kind of thing. In true uninformed-hypocritical fashion, however, I purchase all my books and DVDs from Amazon.com. Nonetheless, I try not to pour too much money into the B&N vacuum.

But I found myself the other day killing time at a Barnes & Noble that opened near my house. I have to admit, it was a surprisingly pleasant expereince. First, I perused 2009 calendars, and opted for a poster style calendar of vivd Japenese woodcuts. Runners up were the vintage postcards from Italy and Paris. I failed to buy a 2008 calendar, last year and as a result, have had not one but two 2007 calendars hanging in my room on the December page since, well, December 2007. I want to avoid that next year. 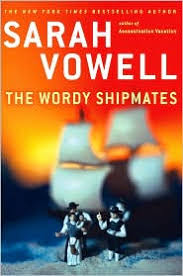 Then i went in search of Sarah Vowell's new release "The Wordy Shipmates," another of her whimsically ironic, rigourously researched examinations in American History, in this case, the Mayflower. On the way, a paperback on a new release display caught my eye. I recognized Edward Hopper's "Rooms By the Sea" wrapping around the front of a book and looked closer to find that it was actually the paperback release of a former professor of mine's memoir. I've had Allen Shawn's Wish I Could Be There: Notes on a Phobic Life on my wishlist for awhile, 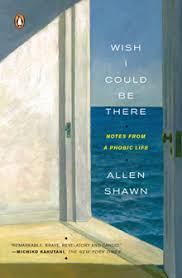 and was stoked to see the paperback sitting right there, looking engaging and well-marketed. I studied music composition with Allen, and also rank seeing the play he composed and co-wrote with his brother Wallace Shawn as one of my top ten most enjoyable nights in the theatre. Did I grab that book and purchase it? No, I updated my amazon wishlist to have the paperback instead of the hardcover. 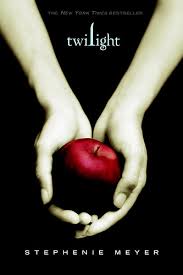 What did I buy? Um, well, after six different people offered to let me borrow their copy of Twilight but never remembered to bring it, I caved an just bought a copy. I figure I might have lots of snarky or celebratory comments to write in the margins. 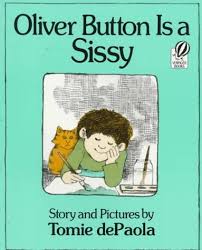 Then last of all, at the checkout counter, I was asked if I wanted to purchase a book for a charity book drive. They had three options. One was some generic looking juvenile fantasy novel, one was an Aztec-themed Choose Your Own Adventure, and the other was Oliver Button Is A Sissy by Tomie dePaola. This is one of the best children's books in existence, and I was happy to add $7 to my purchase so that a kid somewhere can have their own copy of it.
Overall, I didn't feel too awful about the money I spent at the Mega Bookstore.
Posted by Kj at 12:23 PM 3 comments:

So my blog database (read: Brain) has been overloaded with things to write about to the extent that I just haven't written any of it. But here's a quick one: mystery gift appears in mail. An all-too precious yet bad-ass Johnny Cash pin, (which, if I hadn't lost it some years ago, would look great with my original, vintage Shirley Temple Fan Club pin), showed up in my pile of mail today. 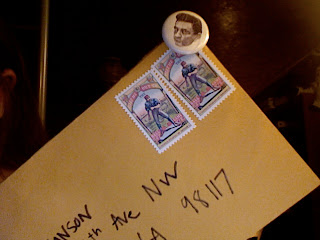 But though it appeared enveloped and stamped- there is no postage meter marking or return address. Was this a drive-by gifting? And if so, was it a late B-day or quite early Christmas present?

I welcome any theories. The handwriting looks familiar, but not sure what to make of the missing postage info. Hmm...
Posted by Kj at 1:35 AM 4 comments:

Blaine Hogan, former classmate, now MHGS alum, has collaborated on and produced another film piece profiling our school, this time with a focus on the faculty. Oh, it makes me happy. And not only do I get to see my beloved Jo-Ann Badley and Dwight Friesen underscored by music, but the music is written and performed by my dear, dear compatriot David Rice.

Enjoy, and please feel free to move to Seattle so you can say significant things in a film of your own one day. I am waiting for you!

The answer to your
question is "Yes, I'm burning
you in effigy."
Posted by Kj at 9:48 PM No comments:

You keep proving what
an asshole you are. Makes life
easier for me.
Posted by Kj at 9:37 PM 1 comment:

Are Moving Into the White House
Posted by Kj at 9:22 PM 3 comments:

The Film Club: A Memoir by David Gilmour

rating: 3 of 5 stars
I may need to apologize to author David Gilmour for approaching this book as a hopeful manual on How To Educate Your Children By Watching Movies. Gilmour's memoir about his three year experiment of letting his son drop out of high school in exchange for watching three assigned films a week, is indeed a memoir, not a manifesto, but boy, I really wanted it to be a manifesto. Then I could hand this book to people and say "See? Watching 50 movies a month IS an education!" Nevertheless, it was interesting to read about other people's film obsessions (everyone's are different) and to read a true story of people taking risks on behalf of one another.

What I liked about Film Club, was both the boldness of a father noticing his son's growing frustration and rebellion at institutional education, and his ability to consider something out of the ordinary in hopes that it might give his son some space to figure things out for himself. Also, that the father provided discipline (3 movies a week, no drug use) but also invited his son, Jesse, into his (Gilmour's) most personal passions- both the actual movies, his own floundering career as a movie critic, and his stories of love and heartache. As dysfunctional as this father/son duo is, the leap off the beaten path opened up whole new vistas of trust, vulnerability and love between them.

What I wasn't as crazy about was simply that these guys are a mess. It's always hard to read memoirs about chaotic times and conflicted people, but at the same time, I have to take my hat off to Gilmour's gutsy move, both in the Film Experiment with Jesse, and in the candid, self-deprecating but also honoring way he wrote about it all.

View all my reviews.
Posted by Kj at 1:58 PM No comments: